Home Venice The Basilica of San Marco in Venice

The Basilica of San Marco represents the east  architectural style in Italy. Inspired by the Church of the Twelve Apostles in Constantinople, it was built from 1063 on the site where it  was the first and the second church dedicated to San Marco, later destroyed by fire. The body of the saint, in fact, had been brought to Venice after being stolen in Alexandriad’Egitto by two Venetian merchants.

Since then the church was constantly enriched with marble and mosaics, enlarged and decorated with columns and statues, to become the masterpiece as  we can see today. The façade and the interior of the church are decorated with many valuable artefacts that Venetians have brought here from all over the world, making it a gift to the most representative monument of the whole city. In particular, in 1204 an army of crusaders left for the conquest of Constantinople. The mission was accomplished thanks to the vessels that the Republic of Venice gave to the army. The subsequent looting of the city, gave to Venice a large amount of materials.

The exterior of the Church: wider than its high

The Basilica di San Marco  is 76.5 meters long and 62.60 wide, and reaches a maximum height of 48 meters. This is explained by the particular nature of Venice, built on a sandy bottom, where it was preferred to build lighter buildings. Outside it is still visible one of the original mosaics  and copies of bronze horses captured by Venetian at the  Hippodrome of Constantinople during the Fourth Crusade. Always from looting comes  “The tetrarchs”, thered porphyry block  with the figures of the “tetrarchs”. The Venetians call them “the four thieves” because according to the legend  there would be 4 thieves surprised by San Marco while stealing the treasure inside and they were petrified and walled next to the Porta della Carta.

More than 8,000 square meters of mosaics decorate the interior with the shape of a Greek cross with 5 domes. The mosaics tell stories from the Bible, allegorical figures, episodes from the life of Christ, the Virgin, St. Mark and other saints. The particular contrast between the light  in the upper part and the darkness of the lower part refers to the division between earthly and unearthly area typical of Byzantine constructions. The light reflected from the mosaics in the upper part gives a heavenly connotation. The bottom instead, made by marble and the floor often represents the earthly world. 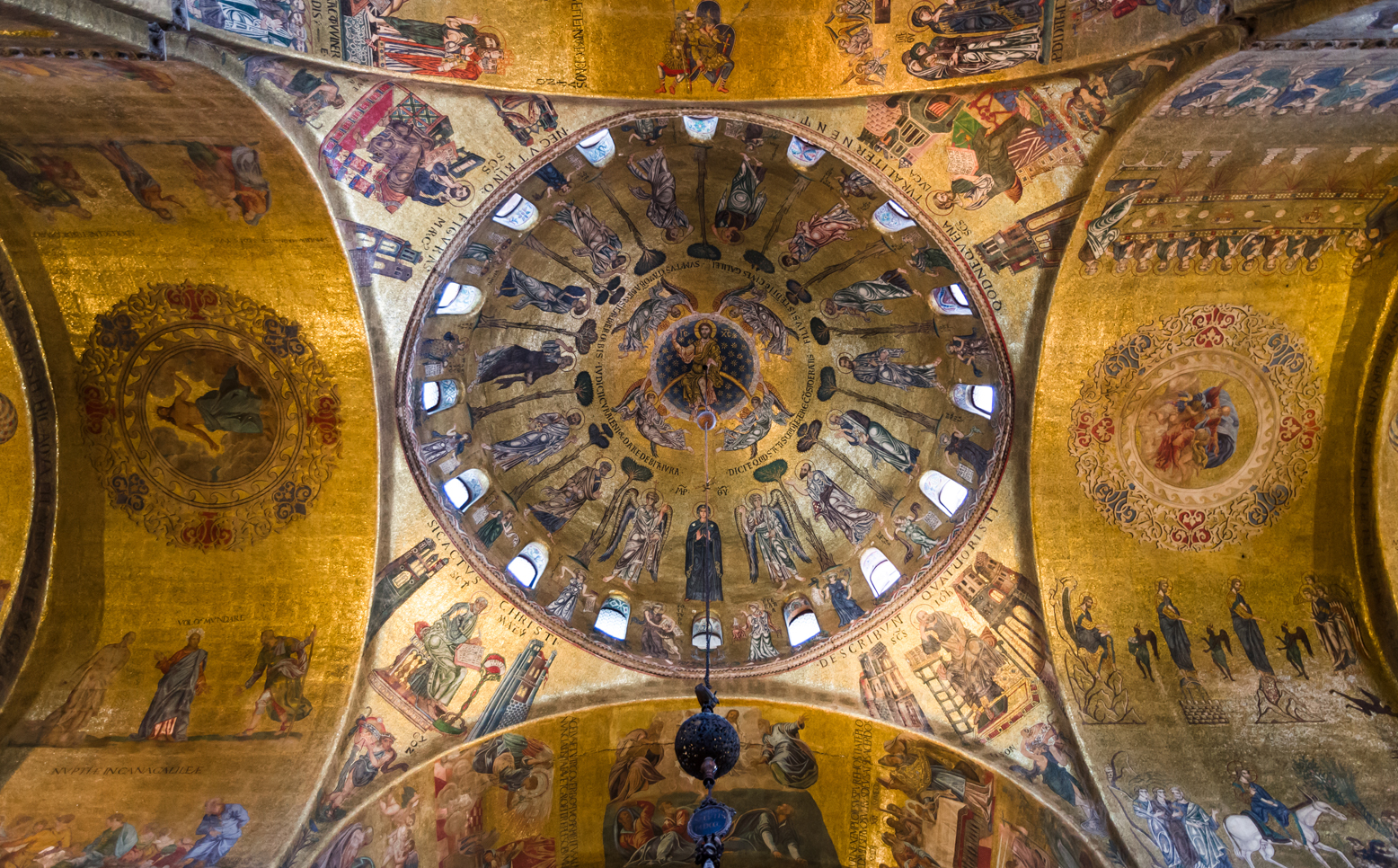 In the Byzantine churches the iconostasis is a transenna used to separate the presbytery from the nave. In San Marco there is an extraordinary iconostasis work of the Venetian brothers Pierpaolo and JacobellodalleMasegne formed by 14 marble statues of the 12 Apostles with the Virgin and San Marco. The sculptures are in white marble but have a brown color made by  the candles that were lit during the centuries between the figures.

The Ciborium with the body of San Marco

At the center of the presbytery of the basilica there is the tabernacle that encloses the high altar where the body of San Marco is preserved. The ancient green marble ciborium is supported by four columns decorated with scenes of the canonical gospels and the apocryphal. Ninety scenes commented by an inscription with episodes from the life of the Virgin and Jesus.

The Italian term “Pala “, comes from the Latin “palla” (fabric)which  indicates the frieze behind the altar to beautify  the area reserved for the ritual. That main altar of the Basilica of San Marco is one of the most beautiful in the world, finely embroidered and adorned with gold and silver. The “Pala” was ordered by the Doge OrdelaffoFalier in 1102, and represents, in addition to Christ and the Doge who commissioned, the Old and New Testament scenes. The “Pala” is opened only for liturgical celebrations of the Basilica, since its creation.  During other period of the year,  this beautiful work of art remains covered by an alterpiece called “Feriale”, made up of a painting on wood which entirely covers the “Pala d’Oro”. The currently visible coverage  was processed in the first half of the fifteenth century by a late Gothic master.

Timetables  and ticket cost for the Basilica di San Marco
In the Byzantine churches the iconostasis is a transenna used to separate the presbitery from the nave. In San Marco there is an extraordinary iconostasis work of the Venetian brothers Pierpaolo and JacobellodalleMasegne formed by 14 marble statues of the 12 Apostles with the Virgin and San Marc
Where: Piazza San Marco
How to get there
Line 1 stop Vallaresso or San Zaccaria
Line 2 stop Giardinetti
Line 5.1 / 5.2 / 4.1 San Zaccaria
When: Everyday 12 – 4 pm
Closed December 25th and January 1st.
The visit to the Clock Tower can be done only with reservation.
Entrance is allowed to children from 6 years old . For information and reservations please call 041 5209070 from Monday to Friday from 9 am to 6 pm
The ticket includes booking fee and expert guide.
The meeting point for the departure of the visit is the office of the Correr Museum, where you need to go5 minutes before the booked visit.
Ticket: 12 €
The ticket includes the visit to Torre dell’Orologio , Museo Correr, Museo Archeologico Nazionale and Monumental Sale Monumentali della Libreria Marciana

This website uses cookies to improve your experience while you navigate through the website. Out of these, the cookies that are categorized as necessary are stored on your browser as they are essential for the working of basic functionalities of the website. We also use third-party cookies that help us analyze and understand how you use this website. These cookies will be stored in your browser only with your consent. You also have the option to opt-out of these cookies. But opting out of some of these cookies may affect your browsing experience.
Necessary Sempre abilitato

Any cookies that may not be particularly necessary for the website to function and is used specifically to collect user personal data via analytics, ads, other embedded contents are termed as non-necessary cookies. It is mandatory to procure user consent prior to running these cookies on your website.