Home Granada 10 things to do and see in Granada 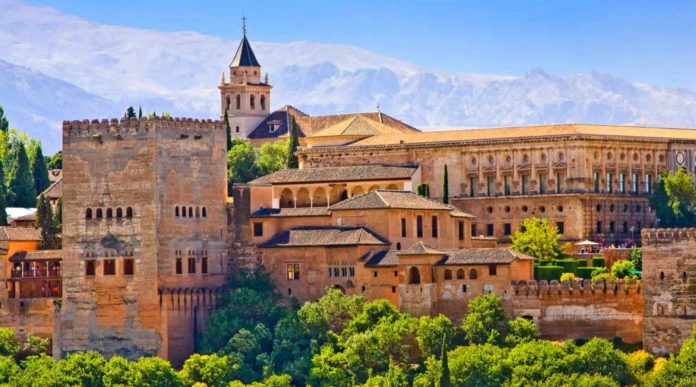 It is easy to fall in love with Granada, its climate, its people, its streets and its monuments. Granada is the most important city of Andalusia, not only for its strategic geographical location, with the Sierra Nevada behind and the Tropical Coast, but also for all its important cultural events taking place inside old buildings or very modern facilities.
Walking through the streets of Granada you will admire Alhambra, residence of the Muslim rulers and most significant monument of the city, or maybe you will visit Albacìn, the old quarter where the Moors settled after the Reconquista. There is a Spanish saying : “Who hasn’t seen Granada has seen nothing “, and Garcia Lorca, a native of Granada, wrote about it: “the emotions of my childhood are all inside me. I have never come out of it.”
In this page we suggest you 10 things to do and see during a trip to Granada

If you are looking for a hotel in Granada, we suggest you to choose among those offered by Booking.com. There are about 220 hotels with prices, pictures and comments of guests already stayed there. Go to Booking.com

One of the most important symbols of the Muslim domination of Granada, is with no doubt Alhambra, declared a World Heritage Monument by UNESCO.

In the past the Moors needed to build a fortress to protect the city, so they decided to do it on the ruins of an ancient citadel called Alcazaba. The new fortress was called Al – Qal aal – Hmbra which in Arabic means “red fortress”. The name is probably inspired by the colour of the walls. The Alhambra (name adapted to the Spanish language) was originally a military citadel, but during the reign of Yusuf I became a rich palace of wonderful courtyards, fountains and gardens. Alhambra has a strong contradiction: on the outside rigid military construction and inside a delicate and graceful structure.

The Generalife in Granada

In Granada, the beauty has no end: just opposite to Alhambra there is another palace, the Generalife, surrounded by beautiful hills and gardens, a sort of oasis of peace and relaxation of the king.

The name of this monument derives from Arabic words Yanat – to – Arif and means “Garden architect”, the best and the most powerful of all architects: God. The gardens of this structure dates back to ‘ 300 and are truly exceptional: arabesque, elegant and colourful especially in spring with all the bright colors of flowers. In summer, with the hot weather of Andalusia, it will be great to go to the Water Staircase and dip your hands in the water.

Dar-al-Horra Palace or Monastery of Santa Isabel in Granada

This stunning structure was built in the fifteenth century on the ruins of a destroyed building of the king Ziri.

This building is very interesting because it is the only one which has been preserved its original appearance. The name Dar – Al – Horra means House of the honest woman and seems to have inspired the mother of King Boabdil, the last Arab monarch in Spain. After the conquest of Granada in 1492 by the Catholic Monarchs, the Arabs gave the Palace to the royal secretary Hernando de Zafra. Later the Queen Isabella decided to found here the Santa Isabel Royal Convent. The palace belonged to the religious order until the twentieth century, until it was bought by the government: currently the Dar – Al – Horra is cataloged as the heritage of cultural interest.

Albayzin district is a UNESCO World Heritage Site for its architectural uniqueness. Founded by the Moors with the name of Bayyasīn, that is, from the city of Baeza.

In the past it reached 60,000 inhabitants and 26 mosques. The intricate system of narrow streets, patios, flower-filled balconies is the same and makes it the more distinctive and authentic place in Granada. The most important monument of the neighbourhood is the Church of San Salvador in Mudejar style, built in the sixteenth century over the main mosque of Albaicín. Do not miss the Roman Baths and a visit at the Arco de la Pesas, small gateway in the defensive walls of the neighbourhood.

The Granada Cathedral is considered the greatest expression of Renaissance church in Spain.

The Catholic Monarchs founded the cathedral in 1492, and wanted it to be an imitation of the gothic model of the Toledo Cathedral. In 1518, Diego de Siloé had the task to design the cathedral and he created a new plan of the temple in the Spanish Renaissance style. Almost 200 years later, in 1704 the work ended, but only one of the two towers of Siloé was built. The main façade however is a masterpiece of Baroque art by Alonso Cano in 1667.

The Royal Chapel of Granada

In a building next to the Cathedral there is the Royal Chapel, built by Isabella and Ferdinand.

The two sovereigns decided, by mutual agreement, that after death their remains should be preserved in Granada.
This city was an important symbol for them, the place where they completed the reconquer of Spain and the expulsion of the Moors. Here are the remains of the two sovereigns and their unlucky daughter, Joanna the Mad and those of her husband Philip the Handsome. In the sacristy there is a small museum where you can admire the Ferdinand sword, the sceptre of Isabella, the silver crown. Do not miss a visit to the small personal art collection of the king : you can admire a Christ by Perugino, L’Orazione nell’Orto by Botticelli, many Flemish paintings including a Memling .

The Catholics considered the Arab baths a kind of brothels and places of prostitution, although it was not this way.

Here the Moors of Granada used to meet in order to talk about religion, to enjoy the curative waters, talk, relax, get a massage and a haircut, with a division between men and women.
Despite the bad reputation, the Arab Baths of Granada survived to the meticulous work of destruction of the Moors symbols after the Reconquer of Spain and the expulsion of Muslims. The Bañuelo, therefore, deserves a visit because it is one of the few survivors Arab baths in Spain. The bathrooms are located on the banks of the River Darro. There are three large areas (cold room, central room and hot room), and a central courtyard with a bathtub.

Although it is less popular than other European scientific parks of Granada it is certainly one of the most successful science park.

A mix of learning and entertainment designed for children but that fascinates adults.
It starts with a journey into the human body where you can discover all the secrets of human DNA, then there is the journey of perception in which you play with light and sound and then the Camera Esplora designed especially for children. In the Park of Sciences of Granada there is a Planetarium that can accommodate 83 people and a sky with a diameter of 10-meter upon which are projected 7,000 stars, the limit of the human eye on a clear night.

Things to eat in Granada

The abundance of ingredients and the millennial cultural fusion has created one of the most interesting culinary tradition in Europe.

One of the most typical dishes are the Sacromonte tortilla, marrow base, eggs and veal offal and the Ollo de San Anton (pork, beans, rice, vegetables) . The “poor man’s potatoes” (Patatas a lo pobre) are made of fried potatoes with garlic and onion, wine and oil. One of the best products of the area is the ham Travelez, often served as tapas, extraordinary tradition of street food. Among the desserts, the Arab influence is predominant: almonds, dried fruit, caramel and spices. The most famous sweet of Granada is the Pionono which takes its name from Pope Pius IX who visited the city in 1897. It is made with eggs, sugar, milk, lemon, cinnamon and rum.

Where to sleep in Granada

Andalusia is one of the most popular tourist destinations in Europe, especially during spring and autumn.

Granada has a long tradition of tourist accommodation, with hotels, B&Bs and apartments for rent. The available facilities are about 400, with very low prices. You can find hostels and rooms for rent starting from 20 € per night but you have to accept some compromise on comfort. With 50 euro per night you can have a great 3 star hotel in the center of Granada and, with a higher price, even luxury accommodations.
If you are looking for a hotel in Granada, we suggest you to choose among those offered by Booking.com. There are about 220 hotels with prices, pictures and comments of guests already stayed there. Go to Booking.com