Home Strasbourg 10 things to do and see in Strasbourg 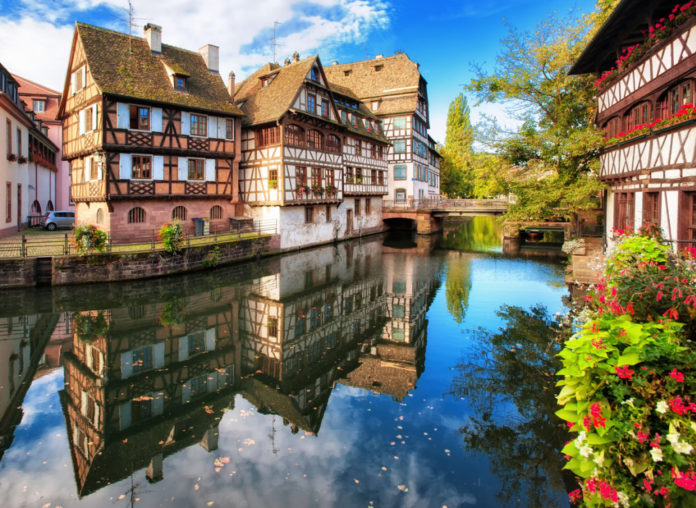 Strasbourg has always been a melting pot of European history. For almost 1000 years it was Germanic Empire’s territory, in 1681 Louis XIV occupied it and  fortified it. At the end of the Franco-Prussian War of 1870 it was given to Germany again, and  was annexed to France in 1919. It returned again to Germanyduring the years of the Second World War, 1940-1945.

Since then, it is not only a French city, but also the symbol of a Europe in fight for centuries and which today has found its stability, at least military. it is therefore no coincidence that it has been chosen as the European capital and you will find three important institutions: the European Parliament, the Court of Human Rights and the Council of Europe.

Today the double Franco-German identity that has torn apart for centuries Strasbourg, makes it a charming and cosmopolitan city, where the architecture, social organization, art and gastronomy coexist at the best of both nationalities. As its cuisine we could say that the city lives in the balance between German consistency and French sophistication!

In this page we suggest you 10 things to do and see during a holiday or a weekend in Strasbourg.

If you are looking for a hotel in Strasbourg, we suggest you to choose among those offered by Booking.com. There are about 110 hotels with prices, pictures and comments of guests already stayed there. Go to Booking.com

The visit of Strasbourg can only start from the Cathedral, one of the highest expressions of the Gothic style in Europe, “miracle of grandeur and grace” as described by Victor Hugo.

The construction (in 1015) started on the ruins of a temple dedicated to Hercules and continued for about eight centuries until the building of the tower took place in 1878. From 142 meters of the spire you can enjoy an extraordinary view on the Grande-Ile and across Strasbourg. The façade of the portal is considered the largest Bible of the Middle Ages for its extraordinary narrativeand symbolic force. Above the door are carved episodes from the life of Jesus, episodes of sacred life, the King Solomon figures with 14 lions and the Virgin and Child. The interior is simple but very large with three protagonists: the stained glass, the astronomical clock of 1572 that every day at 12:30pm turn on a mechanism with Christ Blessing, the procession of the Apostles and a rooster that sings three times. In front of the clock there’s  is the Column of Angels with 3 rows of statues.

The Cathedral Square is the crossroads of the historic centre of Strasbourg where there are some of the most important buildings of the city.

In addition to the Cathedral, from which it takes its name, immediately you will notice  the shape of the MaisonKammerzell, the most beautiful house of Strasbourg built by the rich cheese merchant Bronn. The upper part, which housed the home and the warehouse of Bronn, is made entirely of wood and decorated with animals, warriors, grotesque figures. It is named after Kammerzell merchant who acquired it in 1806. Today it hosts a famous restaurant in Strasbourg. In the corner of the house there is the Pharmacy of the Deer in 1268, the oldest one in France. The square is the most touristy and crowded place in Strasbourg, as well as where the restaurants are the most expensive ones.

Romantic people who want toimpress their lover can have a secret weapon in Strasbourg: the Petite-France, the postcard of the old town, for many centuries the neighbourhood where lived millers, tanners and fishermen.

The houses are those of 16th century, with sloping roofs, balconies with geraniums. The barns and warehouses have been replaced by workshops and souvenir shops, but they are still charming. One of the most photographed scenes of Petite-France is the “PontsCouverts” (“covered bridges”) which kept the name even though it lost the covers in 1700. The towers served as bastions for the defence in case of attacks on the Strasbourg Republic. Nearby is another outstanding military work: the Vauban dam, a house-dam that takes the name of military engineer who designed it and had the idea of using water to flood the entire south of Strasbourg in case of enemy attack. On top of the dam there is a point from which to enjoy the view on the bridges and rooftops of Strasbourg.

Built to house the Prince Bishops, this beautiful building in the centre of Strasbourg, a few meters from the cathedral, now houses three museums: Fine Arts, Decorative Arts and the Archaeological Museum.

The visit starts from the underground where the archaeological museum tells the history of Alsace, from mammoth hunters to the Gallo-Roman civilization. The Museum of Decorative Arts tells the richness of the cardinals: porcelain, sculpture, paintings, pottery, jewellery, all left to the museum, thankfully! The most important museum of the Rohan Palace is the one of Fine Arts, the most important in Europe. A beautiful path from the birth of painting to 1870. Italyiswellrepresented by Giotto, Raffaello,  Veronese, Filippino Lippi and Botticelli, Canaletto, Tiepolo, Cima da Conegliano. There are also many works by Spanish artists, Zurbaran, Murillo, Goya, El Greek and Dutch and Flemish (Rubens, Van Dyck). 1800 is represented by works by French painters such as Delacroix, Chasseriau, Corot, Courbet.

A short walk from the Vauban dam there is theMuséed’ArtModerne et Contemporain(Museum of Modern and ContemporaryArt) housed in a beautifulglass building built in 1998.

The museum continues the artistic journey that the Museum of Fine Arts (see box 4) stops  to 1870 offering a trip through Expressionism to nowadays. The permanent collection includes works by Picasso, Monet, Kandinsky, Duchamp, Ernst and an entire gallery dedicated to Gustave Doré. The museum offers a nice trip in the most representative trends of the last 140 years: Impressionism, Post-Impressionism, twentieth-century art, Fauvism, Expressionism, Surrealism and beyond. Besides the permanent collection, the museum hosts temporary exhibitions on current artistic trends. Do not forget, as many do, to go up on the terrace and have a coffee and enjoy the show on the Petit-France and the Covered Bridges.

Where: Place Hans Jean Arp, along the banks of the River III.
How to get there: by feet in the city centre
When: every day 10 am – 6 pm. Never on Monday
Ticket: € 7

The buildings in which are housed the European Parliament, the Council and the European Court of Human Rights are nice to photograph.

The presence of these institutions in Strasbourg gave it the title of European Capital. The Parliament, built along the bank of the III river, can be visited only in group. There are a lot of requests so it is wise to book several months in advance and can be done directly from the Parliament’s website. Not far away, always on the III river, there are the Palace of the Council of Europe (Palais de l’Europe) and the European Court of Human Rights. The Palace cannot be visited inside and only the hearings are open to the public (must present 1/2 hour before). Dates are available on the website. Same procedure for the Court requiring reservations for minimum 15 people (http://www.echr.coe.int/).

A boat trip in Strasbourg

Strasbourg is a city built entirely on the water of the Rhine and the III river, then a boat trip is the best way to discover it from an unusual perspective.

The boatsof Batorama company leave from the dock close to the Cathedral and offer two different routes: historical Strasbourg and Petit-France. The first tour, available every day of the year, lasts 70 minutes and there are from 4 to 22 routes a day depending on the month and costs € 9.60. The second tour through the picturesque district of Petite-France, lasts 45 minutes and there is only one route a day and it costs € 7.20. Boarding is located about 150 meters from the Notre Dame Cathedral and can be reached by going towards of the III river.

At the foot of the Cathedral in two neo-Gothic buildings, there is a small museum that collects the best of medieval and Renaissanceart of Strasbourg, of the Alsace and throughout the Upper Rhine.

The museum is worth a visit especially for 4 masterpieces: the pair of statues representing the afflicted and won Synagogue (Judaism) and the Church, serene and victorious; the Head of Christ from Wissembourg, considered the oldest figurative glass windows so far known; the painting of “Dead Lovers” a brutal depiction of a couple of people still standing but already attacked by worms, a reflection on the vanity and fragility of youth, of beauty and love. Finally, the other masterpiece is the painting with St. Catherine and Mary Magdalene by Conrad Witz, considered the most important German painter before Durer.

Things to eat in Strasbourg

Let’s start from wine and beer: here we are in Alsace, a region where the brewers came together in confederation already in 1200.

Even today, half of the beer that they drink is produced in the French surroundings. There are hundreds of brands and varieties, and in addition to the most famous commercial brands (Kronenbourg, Fischer, Adelscott) there are microbreweries each with their own specialties. As for the wines, the nearby “Alsace Wine Route” give us the Gewurztraminer, Muscat, Pinot Blanc, Tokay Pinot Gris, Pinot Noir, Riesling and Sylvaner. What to eat with these magical fluids? The Strasbourg cuisine is a summary of the history of the city. Certainly you will find the cabbage (sauerkraut) grated and made into barrels of salt solution with meats or fish. Also the “knack” hot dogs which take their name from the noise they make in your teeth and the fleischenschneke, meat with pasta, rolled and boiled. On the French side we have the pâté de foie gras, which seems to have been invented in Strasbourg, such as the different tarte flambé, made with onions and vigneronne (“mess of the winemaker”) with marinated meat and put in a puff pastry. To enjoy all this, sit in a “winstub” the typical Alsatian tavern with red tablecloths, the rustic atmosphere and friendly host. You will not regret it.

Where to sleep in Strasbourg

Among tourists, parliamentarians, officials of the European institution and the Franco-German managers, there’s a lot of people in Strasbourg every day of the year.

Hotels, apartments and B&B’s, in every category and with prices starting around 35 Euros per night for a double room. As in other French destinations, breakfast is almost always excluded from the price and costs EUR 08 – 12 per person. Prices rise in the old town, especially in the Petit-France area, but the local scenery is worth a few more euros.

If you are looking for a hotel in Strasbourg, we suggest you to choose among those offered by Booking.com. There are about 110 hotels with prices, pictures and comments of guests already stayed there. Go to Booking.com